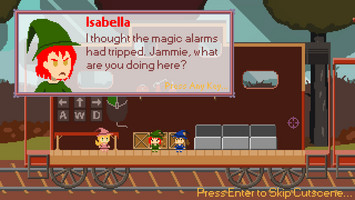 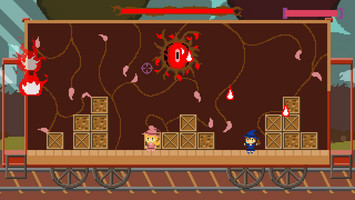 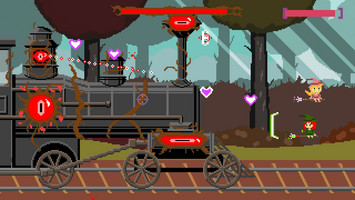 This update comes after a day of user feedback! Here's a list of what's been changed:

Jammie and the Mistwood Rail Incident

Jammie hitches a ride that leads to unexpected problems. Submission to WGJ 102 - "One Big Boss"

Not sure if this was in the last version, but I really liked how you animated the front of the train.

I think the panicking witch in the last train car before the boss might be bugged -- don't think it healed me.

For the highlighting mechanics thing, you reminded me of this video that talks a lot about how to introduce new mechanics (You might have seen it before). I feel like the usual order of things is:

Only reason I mention this is because you put three screens of isolated new enemies at the beginning. This does the job just fine, but you've used up most of your "novelty" in the first few screens. Might feel better paced if it was more spaced out (Though this would also make things much longer since you've got a decent variety of enemies).

Hmm... was it the shield witch? That's semi-intentional, because she's in no danger. If it was one of the runners, that's a bug for sure! Maybe I'll go ahead and give the shield witch as a freebie too... it's probably confusing as it is now.

That's a great and helpful video you linked, thanks! I think I watched part of it years ago, but I'm glad I watched the whole thing this time. Awesome points in there that'll I'll definitely keep in mind. Actually, this gives me an idea as how to introduce  flying with lower stakes... I was going to call this one final, but I'm feeling one more update!