Jammie hitches a ride that leads to unexpected problems. Is this the end of her care-free life? For more of Jammie's adventures, visit: https://shibeyfacegames.itch.io/

[Left Mouse] to shoot toward the cursor.

Most sounds created with BFXR. Music and wind CC0 Public Domain. Music is "Cool" by Spring on OpenGameArt.org. Wind SFX by jorge0000 on Freesound.org.

Wow this is really entertaining!

Thanks for checking it out! I'm glad you enjoyed it. :)

Love it. Background parallax was pretty solid, though it could have used more layers and such. I like how you've tied it in to your previous games. I could easily see this as the intro to a much longer witch platformer/bullet hell game.

Not too sure about the platformer mixed with bullet hell mechanics, at least in confined areas like train cars. You had objects to jump on in the first couple cars, but not so much after that (Which is where it was really needed).

In the boss fight you gave the player a broom, but it was actually kind of hard for me to notice -- in part because there wasn't a lot of room to move in the first place. You did try to communicate it via the other witch on the broom, but I think you could have had a train car just for picking up the broom that leads into the boss fight. Like a storage car for all the witches' luggage, and there's a place for all the brooms. Once I realized that I could fly, the boss fight wasn't all that bad -- just sat on the right side of the screen and killed the rapid fire enemy first.

Also, on the description and the ingame controls, you say right mouse to fire, but it's left mouse.

Thanks for playing! I have some planned updates that will hopefully improve the cars and some sort of notification when you switch to broom mode.

Ooof though, that instruction screen mistake!! Thank you for pointing that out. I think my sleepiness was catching up with me by the time I got to that. That'll be first on my update list, haha.

Really great! The game looks wonderful. The art is incredible, Music/SFX everything. Loved it!

Thank you for playing! :)

Like all the other people said, this one is REALLY good! i think it's the best one out of all the entries and it shows that you poured time into it.

I would suggest, if you plan on revisiting the game, adjusting the difficulty curve. Like Bobgames mentioned you have the first few cars that feel really simillar and don't teach the player much. In the end you have 4 distinct mechanics from the boss alongside the friendly helper.
I feel like you could have used the cars to introduce each mechanic on it's own and then throw them all in at the end. All together tho, amazing work I really like it :D

Thanks for playing, and thank you even more for the feedback! I'm definitely going to go back and rework the first few cars. Now that the main structure of the game is in place (famous last words incoming) updating those cars should be pretty easy.

Amazing game! My only complaint would be that the first few phases of the boss feel a little too similar. It starts with the boss shooting projectiles at you, then shooting faster, and then there are 2 of them... It would be nice to give the boss more variety. Other than that everything is absolutely amazing. Art, sounds, and controls are just great. Good job!

Thank you very much! Your critique is spot on... I'll probably go back and update some of the cars when  I have time. I want to keep a learning curve on each car, but right now they are pretty plain. Thanks for playing!

This is...... GOOD. I have nothing more to say. The art. The mix of SFX execution. The choice of music. How you introduce each attack one by one preparing for the final fight. My only complain is how I didn't figure out until my second playthrough that I can fly when fighting the final phase...

Thank you very much! I'm glad you left that comment about the flying part... I was worried that the transition between play-modes could be confusing. I'll see if I can add some sort of tip on screen at that moment. Thanks for playing! :)

Wow I revisited the game again today for a little inspiration, and I see a lot has changed. It's become plenty more difficult, but still fair - at least for experienced bullet hell player like me that can just breeze the last phase lol

Keep up the good work, looking forward for your submission for week 103 tomorrow

Hey, thanks for coming back and checking out the update! :)

I indeed have a 103 submission in the works, though it will be much less tight in the gameplay department I'm afraid. It's mostly me messing around with art styles, akin to my 102 submission, "Puddle Jumper". But regardless, I hope you check it out!

Wow! this may be the best game i've seen so far!
no critic on this one!

Thanks so much! Glad you enjoyed it! :) 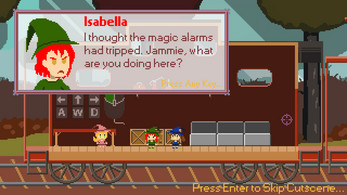 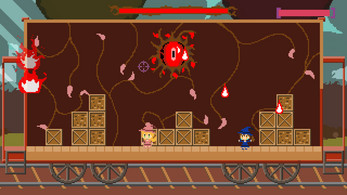 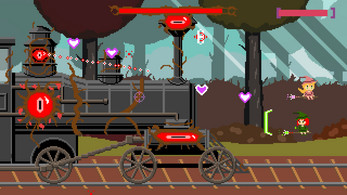