Game #17 in my "Jammie" series. For the other games, visit https://shibeyfacegames.itch.io/

Isabella the Witch is supposed to be meeting with Jammie (and a few friends tagging along) for her weekly magic parole meeting. However, a bumbling intern broke a vessel containing some mischievous faeries. It’s up to Isabella and company to catch them and save the Witch’s Council from… “mischief.”

Avoid attacks and dangerous obstacles. Collect the Fae Essence dropped by the faeries when they attack. Fill your essence meter to capture the faerie!

All music by Eric Matyas, www.soundimage.org
All SFX CC0 from Freesound.org.

Love the vector art; and very sweet gameplay too, and indeed so much content -- can't believe all these were made for a weekly game jam

One suggestion though... I think one part of the cutscene, the one when the fairies are released, can be made into automatic animation instead of advancing one by one with next -- it just feels... kind of weird imo XP

Thanks for playing! You're not the first think it's hard! Mariel the ghost is probably the easiest option. (Here I was worried the game was too easy...)

It was all finished in time for the deadline except the intro story. I'm glad you didn't get to see the terrible text-wall that was there previously.  Good suggestion, auto-animating that might be better! I may go back in and update that! After these last two jams I needed a break, so I've got the time. Otherwise, gotta get ready for a Magical Girl Jam! ;)

Still one tough son of a b*tch tho XDD

Looking forward to if you will actually participate in the Magical Girl Game Jam ;)

I've already joined! Assuming I don't get hammered with surprise freelance work ( or anything worse ;-; ) I'll be submitting something!

This is awesome!! SO MUCH CONTENT!!! 4 playable character AND two levels AND two enemies that get harder and harder to beat over time wil two little boss rush levels!

Its really cute! I of course tried them all (ghostie op) but doggo is the CUTEST for sure! :3

if I HAD to critique something, I would say the story was quite long and didn't really help me with the context of what the gameplay was, but as you mentioned it seems to be an ongoing story? so that is awesome for your previous players! :D

I really had the urge to fly omnidirectionally the whole time, especially to fly backwards to grab a spirit orb that I couldnt have possibly reached cause of a burning swinging thing in the way when I passed under it.

Thank you very much! I really appreciate your kind words. :)

You're totally right on the story part. To be honest, it wasn't supposed to be a giant text dump, I wanted it to be more like comic panels/pages with drawings and dialogue. But, I way over-scoped and something had to get cut. Maybe I'll go back and clean that up if I have some time. Even players who've kept up with this "series" would probably find that text dump embarrassing.

Your comments about full movement range got me thinking too. I was initially very locked into the idea of a "chase", but the gameplay became more about collecting energy. Maybe I'll give it an update with full movement to see how that feels. Touching the faerie will cause large damage, so players don't just camp it for orbs, haha.

Really good feedback, thank you! I hope to incorporate it into an update, time willing.

Thanks again for your feedback! I've updated the game based off your comments, as well as Thoof's. Details on the devlog, or check out the game again if you are interested! https://shibeyfacegames.itch.io/mischievous-faeries/devlog/135232/version-20-upd...

Nice work on the art this week :) I liked propeller-doggo!

I liked the various abilities, though I felt like the ghost one was probably the strongest. The barrier could have been slightly taller -- as is, the fire projectiles can actually go over the shield and hit your hat, damaging you.

The background parallax was cool, but in an indoor environment like that it makes it feel like the bookcases/window are pretty far away, and then you've got the background girls climbing the ladder and they're roughly the same size as the foreground girls.

I felt like the first level had a bit too much time between pickups, and some of the fire attacks lit things on fire too quickly to react to. I much preferred the second level, which was much faster paced but had less potential to suddenly damage me.

Thanks for checking out my game! Glad you enjoyed the artwork, because if I'm being honest, that was about 90% of my focus on this one.

Maybe I'll rework the timer on the first level. It's random on the first "phase" (the arcing fireballs), but can lead to some pretty long gaps, especially if it keeps pulling high numbers.

It's funny that you liked the second level better! I threw that together really fast (like an hour), but i can see that it ended up with more of a "flow" to it. Looping back to my art comment, for the first stage I really just wanted to make a bunch of silly fire scenarios, and maybe slacked on the game design there. Though I do think it fits the "mischief" theme the best of the two stages.

As always, thanks for the comments and suggestions! I really appreciate your feedback. :) 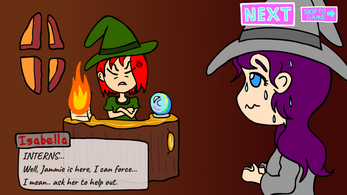 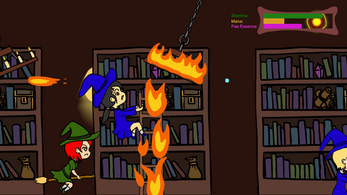 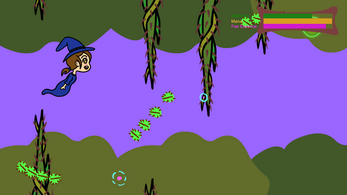 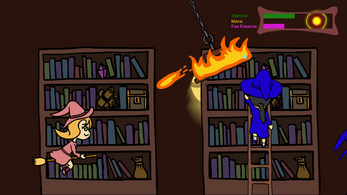 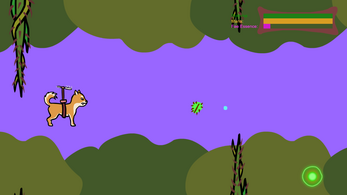